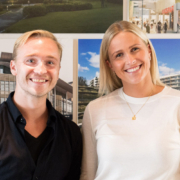 Emilie was urged by her tutor at Kristiania University College to apply for an internship at NIELSTORP+ architects. «I was interested in working for a well-established firm to further develop as an interior architect, after completing my bachelor’s degree. NIELSTORP+ is known to inspire architects in Norway – and beyond. It’s a privilege to get this opportunity»

Kristoffer has studied architecture in Copenhagen, and wanted an internship at NIELSTORP+ because of the firm’s international approach, large-scale projects and competitions: «The environment for learning and development is highly lucrative here. The projects that have come out of these offices are significant and well known. It is a highly sought after place to work. »

«It’s a great platform for learning and interdisciplinary work. Everyone’s been really open and inclusive. I look forward to learning and working on major projects and competitions «says Emilie

«It’s a great place to further develop, learn and hopefully lay the foundations for a good future career,» concludes Kristoffer. 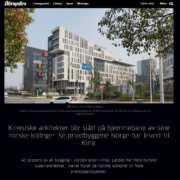 Aftenposten newspaper published an extensive article this summer where NIELSTORP+ were highlighted as the main Norwegian architectural success stories in China.

China Eastern Airlines commisioned NIELSTORP+ to design their new global headquarters, and this was completed in spring 2018 on Hongqiao aiport. The building complex is approx. 245 000 m², twice the size as the planned new government quarters in Oslo.

Here is an exerpt from the article:

“China has 1,3 billion residents and several hundred thousand architects – and still commisioned this enormous project to a Norwegian architectural firm.

– You might say we’ve gained a peculirar track record on airport related building. Maybe the Norwegian characteristics with many nature elements in contrast to traffic and pollution may be a trace to why they chose us, says Torp.T

Niels Torp and his collegues have drawn the headquarters for SAS in Stockholm, Royal Jordanian Airlines in Amman, British Airways in London, as well as Oslo Airport Gardermoen T1 (as part of the firm Aviaplan). When the firm was invited to participate in the international architectural competition for China Eastern Airlines’ globale operational center – it was a result of this.

– Our philosophy is really quite the same, even if we make big urban plans or big buildings. The Chinese have been very interested in what we did for Aker brygge and Tjuvholmen, explains Niels Torp”