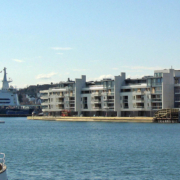 As time passes the project comprises a whole city district. Although it’s separated from the downtown area, it is absolutely a part of Sandefjord’s new appearance. The district at Kilgaten will develop around a city district plaza, Kilen Square, as its main attraction. Snug and open to sunlight, it is surrounded by a variety of buildings with a diversity of functions. The district will attain its substance once the square is built; it will become a place. Building 3, the relatively small edifice on the north, scales down the development in its encounter with square.

Building 4/5, with its large and clearly defined sloping roof surface, is placed solidly and strongly against building 7, the 11-storey high-rise, a slim vertical building with a relatively modest footprint, and marks the space of the square as the main element of the area. Plaza spaces, narrow alleys, water spaces and quayside strolls comprise a versatile course of public spaces and lines of communications.

The challenge in this sort of urban district development is always a matter of getting the dimensions of public spaces right in relation to the amount of people who are being invited into it. Oversized and barren surfaces, docks and quays that are too wide in this context are well-known problems. The design of large buildings is architecturally demanding on exposed property, facing the sea, with no terrain to support them. Naturally, buildings need to be relatively substantial on shore properties to justify capital expenditures. The costs of a foundation have to be spread among a minimum number of floors.

Compounding this problem, modern residents want to park their cars close to a lift and expect the lift to be close to their residence. The garage requires an extra storey of its own and, closed and inaccessible as it must be, this complicates retention of a pleasant milieu along the quay. Another challenge for the builder is the meticulous detail work considered necessary for a sculpturally designed, aesthetically pleasing building. The development of a waterfront property calls for special characteristics. The architect knows that contextually the building will often be surrounded by vessels of various sizes, and a relevant style must have a certain maritime affiliation. This isn’t a boat being built but it is a building on the water. One seeks a change in pace where the development reaches the shoreline and crawls up on land.

The Home of China Eastern Airlines

China Eastern Airlines is one of the world’s major airlines and wanted their new headquarters located at Hongqiao airport in Shanghai to reflect that. The new complex, including interior public areas and surrounding parklands, are designed by NIELSTORP+ architects while the engineering is done by ARUP and construction drawings by local architectural firm ECADI.

The complex totaling approximately 245.000m² has a varied program containing:

The square-shaped site is defined by the terminal pier and surrounding office buildings. The site is transformed into a green oasis suited for people by establishing a parkland, with clusters of trees as the outer boundary. Within this square-shaped boundary, we placed the China Eastern Airline village, a series of connected buildings with an amorphous and undulating outline.

An dynamic shaped park emerges as a result of the space between this square outer boundary and the undulating outline of the CEA village.

The CEA village consists of horse shoe shaped buildings organized around the central atrium, with “streets” and bridges between them. Just like an ordinary village with a central plaza, roads and lanes. The atriums constitute the hearth and the central «living rooms» of the company, where people meet and ideas made.

The atrium is split in two by the main road. The major internal  communication routes circles around – and connects the two parts  of this atrium – via bridges. The wings of the buildings spread out in the form of a star. This gives short and efficient communication routes.

Most villages have a monumental building placed in the midst of the plaza. The CEA village will have one tower in each of the two atriums that complements each other and holds the village together visually. The towers contain meeting centers. The north tower has a corporate management club on the top floors.

To bring light, air and sight-lines into the village the mass of the buildings slopes into the centre. 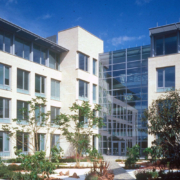 To retain a human scale for a development intended to house 4000 staff, we have divided the office accommodation into a series of “houses”.

Designed to promote social interaction and informal meeting, the street 175 metres long, is the hub of the scheme.

To contrast with the buzz of the street, the office areas are designed to be calm, welcoming and informal within an ordered plan. Each of the office buildings is divided into two wings by a central lift lobby, which faces onto the street.

A strong link between the internal and external environment is characteristic of the development, with views out to the courtyard and the landscape beyond, from the street, office areas and the restaurant.

From the exterior, Waterside is viewed as a series of buildings in the landscape, linked by a transparent glass enclosure. Grass mounds which create an undulating visual screen around Waterside, the stepped roofline and projecting sharp stone clad fins to office wings all serve to break down the mass of the complex. 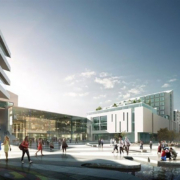 Programme declaration: from a shopping mall to an urban city centre. Åsane is a part of the suburban patchwork sprawling into the valley floors and along the fjords from downtown Bergen. In an urban perspective this residential development is spread out. Åsane centre is marked by the construction of separate shopping centres lacking clearly articulated contexts. The area is blessed with beautiful hills all around, a proximity to the fjord and lakes in the valleys. These provide ample opportunities for outdoor recreation. The architects tighten up the centre of Åsane by making it a single building mass with a clear delineation against the surroundings, i.e., a city edge. This building mass is interjected with streets, narrow alleys and open squares. Hence, we get a defined and understandable urban space between buildings. Axes and lines of sight run to the landscape from some of these urban spaces. Two main entry points have been established in this dense “urban development”, the city gates to the south and to the north. These stand out in the landscape, heralding the presence of Åsane centre to the main access roads. New buildings are erected to the north and south of the shopping mall Arken. These have been combined and shaped into a large curved bow along the E39 highway. This clear form essentially announces the presence of Åsane centre to its environs. Well-known principles for urban design are used: alleys, streets, avenues, squares, open spaces, vista lines and a medley of functions. From the open space at the southern port a tree-lined main street leads into the central plaza, which becomes the community’s major meeting place. Glass-roofed narrower streets and alleys run perpendicularly from this avenue and in toward the shopping marts. A planted wall at a height suitable for sitting runs around the school with a main entrance facing the plaza. The church stands as a solitary backdrop motif to this square. The space is broad enough to admit sunlight into all areas of the ground space. From the two “poles” of the plaza one can view the two major lines of traffic and activities relating to the space. A powerful main axis leads westward, bringing nature’s splendour into the centre of the city. 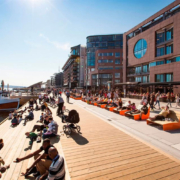 The challenge was to build “urban qualities”, the atmosphere of a living city, into the place: to give it identity, intimacy, drama, monumentality, friendliness, contrasts, humour and the feeling of joy – to ensure the buildings talked with each other across the streets, narrow passages and public spaces.The contact surface with the waters of the fjord has been exploited and pulled deep inside the mass of buildings via narrow passages and streets that run down the quayside and provide energy and life to the pedestrian areas.

The four buildings are designed as city blocks and appear more like complex “building environments” than individual buildings. The “city blocks” provide a typical urban cross-section of functions: theatre and a basement cinema. Shops on street level and and offices on middle floors with apartments with lush roof gardens. The result is a neighbourhood where a kindergarden sits next to a night club, with activities for every age and every desire.The apartments are conceived as a complete residential complex covering the rooftops of the city, with sun and magnificent views, far from the noise of the busy streets below.